This blog post discusses government deficits and debt and why they still matter. See the full post below.

The nonpartisan Congressional Budget Office just issued its latest Long-Term Budget Outlook, and the outlook is bleak. The CBO projects that the national debt held by the public will reach twice the size of the entire economy (measured in terms of gross domestic product, or GDP) by 2050—and that’s if interest rates don’t shoot up in the interim. The recently passed American Rescue Plan Act of 2021, with its nearly $2 trillion in new spending, will contribute to these mounting debt obligations. While the size and design of the aid programs in the legislation is worrying—the programs were the product of a political process, and it shows—what really worries me is what the future holds for US fiscal policy.

Given all we have been through the past year, it is easy to forget that the US was mired in red ink well before the pandemic, and much of that is due to deficit spending from 2000 onward. When we entered the new millennium, the national debt was roughly a third the size of the economy. By 2019, it had reached nearly 80% of GDP. The national debt problem didn’t happen overnight due to COVID-19.  (See figure below.) 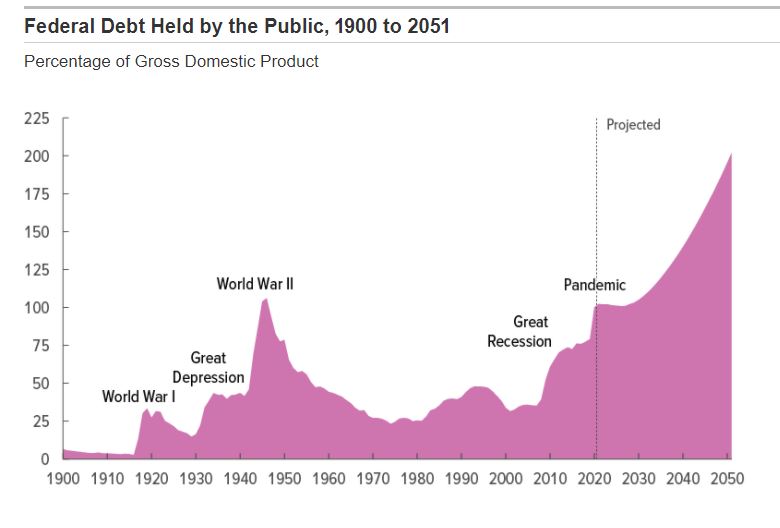 As a political economist who has studied government spending for my entire career, I don’t see an easy way out of this mess. Entitlement programs like Medicare—a major driver of deficit spending moving forward—are still in desperate need of reform. Increased economic growth rates would help make the debt more manageable, but in recent decades it’s been difficult to move the needle on growth. If interest rates spike, debt service will take an even bigger chunk of the federal budget. And there is always the risk that demand for US debt will dry up—especially if the dollar is no longer viewed as the world’s reserve currency.

Many experts are saying that now is not the time to worry about the federal debt. Federal Reserve Chair Jerome Powell told NPR that even though the national debt is on an “unstainable path” and will need to be addressed at some point—“that time is not now.” In other words, the nation is in crisis, and we need to step up and do what it takes to save the economy. I’m sympathetic to the argument that in times of crisis, fiscal restraint should not be policymakers’ top priority. My concern is that it is never a priority for elected officials, and that even if we can reach short-run agreement on restrained fiscal policy, those agreements are often not durable.

In part, this is due to the structure of US government. When I testified before the US House Judiciary Committee in 2017, I warned in my prepared remarks that

Congressional reelection motivations make it tempting for lawmakers to leave difficult decisions about programs like [Medicare] for tomorrow. Waiting until there is the “political will” to act typically means waiting until a crisis occurs. Even if these political hurdles can be overcome, Congress faces still another obstacle—itself. Article I, section 5 of the Constitution reads, in part, “Each House may determine the rules of its proceedings.” This single line constitutes a major obstacle for legislators attempting to enforce budget rules. More generally, Congress, unlike a corporation, cannot write a contract that binds future members. This is true with respect to both substantive reforms—such as changes to entitlements—and process reforms—such as changes to budget rules. Congressional budget rules are routinely gamed, ignored, or changed, which is not surprising given the lack of strong enforcement mechanisms available to legislators. What Congress does today, a future Congress can undo tomorrow.

What’s worse, elected officials now can point to an economic theory that is currently in vogue—Modern Monetary Theory—to justify inaction. MMT is the economic equivalent of the “eat what you want without gaining weight” diet. As long as the government can print money, the theory goes, it can manage its debt. Even MMT advocates acknowledge, however, that inflation will eventually act as a restraint on debt. (Turns out you can’t eat all that you want.)

The reality is that if left unchecked, a run-up in the national debt may create a fiscal crisis that threatens the stability of the US economy. When will we reach that crisis point? Nobody knows for sure. But if we start thinking now about how to manage the federal debt, we’ll be less likely to see that crisis materialize. We shouldn’t let COVID-19 be an excuse for inaction.

So are you worried about the national debt? I’d love to hear your perspective.

David Primo is the Ani and Mark Gabrellian Professor and a professor of political science and business administration at the University of Rochester, where he directs the Politics and Markets Project.

With the yields on US debt at very low levels (0.12% on the 30 year TIPS, and 2.33% on regular 30 year bonds) and inflation at persistent low levels for the last decade (1.7%) wouldn’t it be prudent to take on even more debt, not less? Certainly there are initiatives that could yield greater than 0.12% real or 2.33% nominal returns. I would be in favor of more stimulus on programs that have longer term benefits such as lead abatement, infrastructure spending and green energy subsidies.

Relatively speaking, I am very concerned about our national debt, particularly as it relates to (the possibility of) hyperinflation. I am also irritated by the types of comments made by Mr. Powell, as he knows the national debt is never a priority for elected officials, and likely never will be. Even if the economy's growth overtakes the amount of debt the US owes, the debt is still there; it does not go away.

Great points in the article and follow-on comment. Curious about a key assumption - Tech Innovation has been seen as a central driver of GDP growth - does this hold with the next iteration(s) of software and hardware? Or like in chip design, has GDP growth hit its own “Moore’s Law” and unable to bail-out the sort of debt the US is accruing. Additionally, is there a populous-proof policy mechanism that would actually allow the US to strategically plan beyond 1-2 years?

Perhaps more sincere processes and prioritization toward the commercialization of applied research will help technology innovation, (and subsequently skyrocketing GDP). Some federal research labs and universities have gotten serious about this but most such attempts remain a low priority. Ninety-percent of all patents still never see the market in any way. Hopefully the US will hurry up and lead the way (but Bayh–Dole is 40-years old!)

Indeed, if one looks at the highest level of debt US had in the 20th century, it was WWII. That debt was paid by growth in the 50s and 60s, as well as lower holding returns to bond holders. If growth and future surpluses are not going to absorb this recent ramp up, it's either inflation and/or decline in holding returns.